Telling Others About Jesus 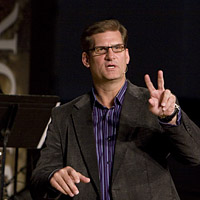 Challenging Crown’s community to gain an unshakable faith was Smith’s goal for which he started by sharing his passionate desire to shake Crown students out of a pre-occupation with their own faith-journey to consider the journeys that others are on.Smith began his undergraduate education at Toccoa Falls in Georgia. His faith was then tested when his parents separated, which led him to question all that he had been raised to believe. Later, during his time on a professional soccer team in California, despite the lures of all things worldly, Smith saw how God had allowed his hardships in order to form him into a ‘resilient and indomitable knight of God.’ That began to build what would become an unshakable faith. Smith now ministers at Fairhaven Church in Dayton, Ohio, and works 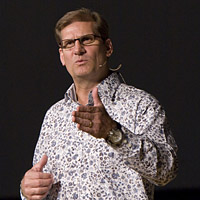 passionately with the church there to reach the lost. He cautioned students against the twin lies that Christians face: ‘Cultural Christianity’ and ‘Convenient Christianity.’ These two lies keep Christians bound to their own spiritual journey, and “don’t feel responsible for the lost,” Smith told the Storm Chaser newspaper. “But I tell you,” he continued, “you live out your faith by telling others about Jesus.”To hear David’s Deeper Life messages from Feb. 3-5, 2010, go to iTunes U under the academics tab on the homepage and click on the Chapel Messages.The mission of Crown College is to provide a biblically-based education for Christian leadership in The Christian and Missionary Alliance, the church at-large, and the world. An education that you can be proud of is within your reach,  apply now for the fall 2010 semester. Our  admissions team is ready to assist you at 1-800-68-CROWN.

Telling Others About Jesus