Sharing the Gospel Unexpectedly: A Story from Eastern Europe 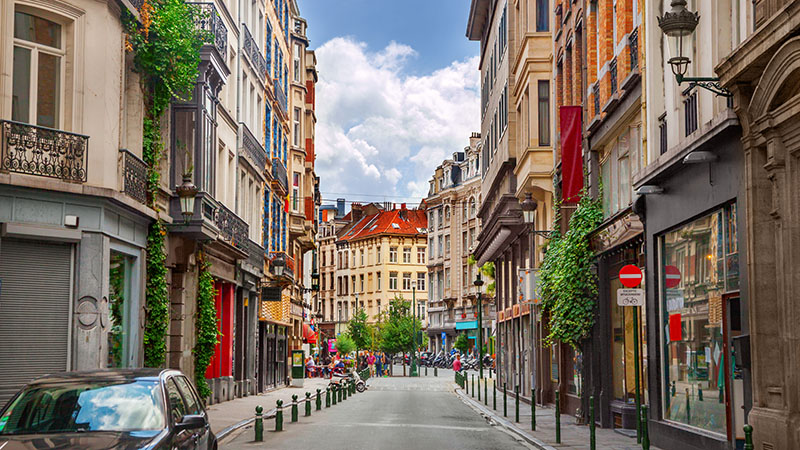 The team of college students walk down a crowded European street. They admire the beautiful architecture. Suddenly, they stop in their tracks as God opens their eyes to the fact that they are surrounded by thousands of lost people.

That’s what happened to Jack and Amanda, part of a team of eight students from Crown College who recently took a short-term trip with Crown’s Destination:Serve program to Eastern Europe, with the goal of reaching many of the lost people in a beautiful city.

It was the breakout session at the English school that left a huge impact on Jack and Amanda. The people in the group agreed that they tend to put a lot of their trust and hope in money. They rely on it to supply all of their needs. So Amanda, a believer from America, decided to share Who it is she places her hope. “I put my trust in God, not money. Money will always fluctuate, but God’s love doesn’t,” said Amanda.

After the breakout session, a local student cornered Jack and Amanda in the room. He was very curious about what Amanda said earlier in the day. He asked, “What does it mean to put your trust in God?”

Jack and Amanda shared their testimonies, and what it means to trust God with everything in life. The student listened to what they said and told them he would think more about it.

During the trip, the team partnered with an organization to work in their English Center and build a relationship between Crown College and the local international workers.

Team leader Kelsey says leading the English classes was the best experience for her. “Seeing my teammates toss awkwardness aside and ignore the language barriers to jump into a conversation with the students made me feel so proud.”

It was an incredible opportunity for the Crown students when the organization reached out and said the international workers wanted a short-term team to join them for a few weeks. However, the organization couldn’t provide much information to the team before the trip because of the need to protect their safety.

The students signed up for a “mystery trip” — at that point, the exact location was still unknown. A few weeks into their planning they learned where they were going, but the details of what they would do had to remain a mystery. It was all about trusting in God.

“I was willing to take a chance on a country I knew very little about because I knew God was opening this door for a reason,” says Kelsey. Everything then fell into place.

The team spent most of their days with the international workers, building relationships with them and helping with whatever would make their lives easier.

They spent some days doing home visits where they had the opportunity to meet families from the organization. The team noticed a theme of unity among the different families. They never expected to be in Eastern Europe doing the work they did, but they were obedient to the Lord’s calling. They looked back on their lives and wouldn’t change a thing because they know they were right where God has called them.

Traveling the city by foot, taxi, and bus, the team saw the rich history around them, which provided a look into the culture of the people of Eastern Europe.

“When we arrived, it was evident as to why God was opening our eyes to this part of the world,” says Kelsey, “A real relationship with Jesus Christ is almost nonexistent.” As Kelsey walked around the city, she stopped and prayed in many places. The country has a background in Eastern Orthodox Christianity, but people have lost the passion and trust they once had. Kelsey prayed and asked God to open their eyes to the hope they can have in Him once again.

Julia, another student on the trip, had an opportunity to share her faith in the airport and on their 11-hour flight with a man from the Islamic faith. They started their journey by comparing their faiths for the first few hours. At the end of their long conversation, he challenged her to pray the way people do in his religion. So Julia responded; “I challenge you to read the Book of John.”

Julia says throughout their conversation, she continued to bring up John as evidence of Jesus’s deity and Trinity. The man did not have access to a Bible, so out of kindness Julia handed over her own so the man had the opportunity to read the Gospel of John.

Julia and the man still keep in touch, but he has yet to read the Gospel of John.

Please continue praying for this country, and all God has in store for them. Pray God would move in their hearts and they would seek after His heart.

Those who built relationships will continue to keep in contact and develop those friendships. The hope is to create a long-term connection, allowing Crown students to do longer trips such as internships and apprenticeships in the future.

We changed all names and locations mentioned due to the nature of this trip, to protect the safety and privacy of those involved. God did an amazing work in the group that stepped out of their comfort zone to do what they were called to do.

Called to Serve.
Prepared to Lead.