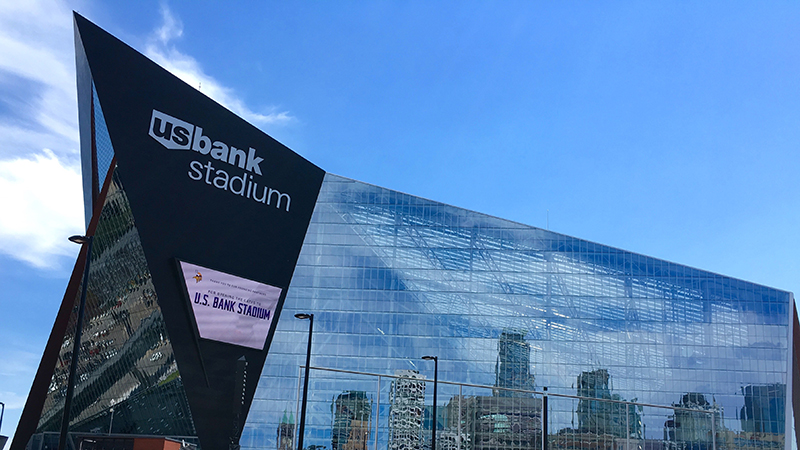 A new report this week paints a troubling picture. Some 23 law enforcement agencies are set to combat human sex trafficking in the Minneapolis area during the Super Bowl this week. Last year, at least 750 people were arrested in connection with trafficking in and around Houston, TX. The saddest statistic of all? The same report noted that 1.5 million people in North America are currently victims of human trafficking, and the majority are children.

While some have argued that any large public event tends to bring out the worst in human trafficking criminals, there’s no question Minneapolis will be flooded with people who are not always seeking the most tranquil and peaceful outlets for their energy and angst.

That’s why a Crown College student named Mikayla Sauerbrey decided to do something about it. As the Prayer Ministry Coordinator, she helped organize a prayer walk around U.S. Bank Stadium last week as spiritual preparation for the sporting event this weekend.

“For the last several years I have been aware of the issues of human trafficking in connection to the Super Bowl, and when I learned last year that Minnesota would be hosting in 2018, I began to pray and ask God what He wanted to be done in response,” says Sauerbrey.

She started with an awareness campaign around campus, putting posters in prominent places so other students would know about the issue and start praying. She made an announcement in chapel in front of several hundred students, asking them to get involved.

Then, on January 21st, Sauerbrey led a prayer walk to pray for the police and safety professionals, peace for families dealing with the problem, wisdom for the medical staff, protection for the athletes, and for what she describes as God’s light to shine in the darkness.

While the prayer walk was a first step spiritually, she says the work is not done and she hopes other Crown students, area churches, or any other Christians in the area will start praying.

Sauerbrey identified organizations like A21 Campaign, International Justice Mission, and Polaris Project as those that are combating the problem first-hand.

“They are working relentlessly to stop slavery in the 21st century,” she says. “Once you have learned more about human trafficking, use your voice to bring awareness to the people in your life either in person or on social media with organizations like the End It Movement.”

“If you want to be hands-on in the fight against modern day slavery, the National Human Trafficking Training and Technical Assistance Center and the Minnesota Human Trafficking Task Force, as well as local law enforcement agencies will have resources and opportunities for you to know what to look for in regards to human trafficking,” she suggests.