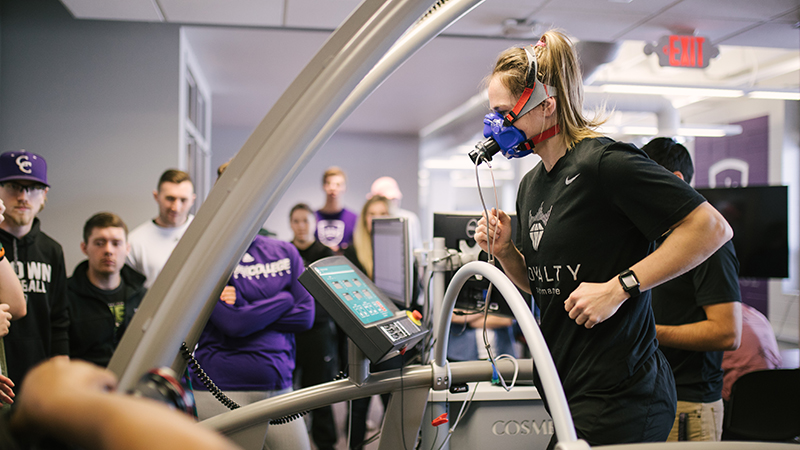 Allie Thunstrom is not the kind of person who backs down from a challenge. Even at a young age, the Minnesota-based athlete showed a competitive side.

It all began when she saw her two older brothers playing hockey. Her love for skating was off to an early start.

“I have been involved in sports since I learned how to walk,” says Thunstrom. “I faintly remember learning to skate at an aunt’s cabin. My mom tried to make me wear skates that had double runners (two blades), but of course, I wanted the real thing.”

Thunstrom’s love for sports and skating continued throughout middle school and high school. In hockey, she set all-time school records in goals and points at North St. Paul High School before being named Ms. Hockey in 2006, an award given annually to the state’s top player. In addition to playing hockey, Thunstrom won All-State Honorable Mention and the All-Conference Team for softball and soccer all four years.

Her athletic ability soon caught the attention of Boston College.

“I ended up getting a scholarship to play hockey and softball at Boston College,” says Thunstrom. “Sports have been and always will be a huge part of my life.”

After a successful college career and even playing professional women’s ice hockey, Thunstrom wasn’t finished. In 2012, she decided to take up yet another sport: speed skating.

“[Speed skating] was so much more challenging than I ever imagined,” she says. “The technique is different than hockey, the positioning is different, and you only turn left. The type of workouts I started participating in were, shockingly, very different from what I had been doing. The sets were longer, the amount of stress on my lower body increased, and I remember leaving practices wondering how it could be so different when they both involve so much skating.”

The most significant trial in changing from hockey to speed skating for Thunstrom was the level of endurance and stamina required in the race. While playing hockey, the speed you are going changes during a typical shift, but with speed skating you must maintain full speed the entire time. This forced Thunstrom to focus on beating her own time. Since speed skating is an individual sport, it puts the skater in control and places more pressure on you as far as how hard you train.

“One thing that makes speed skating different is knowing that one race can literally make or break your dreams,” says Thunstrom. “It was very nerve-wracking but really fun at the same time.” Throughout her training regime, she had one major goal in mind.

January 2nd through January 7th of this year, Thunstrom competed at the Olympic Trials in Milwaukee, Wisconsin, and placed eighth in the tryouts. Although she will not be competing in South Korea, she is determined to persevere in her training and anticipates making it to Beijing for the 2022 Winter Olympics. Her plan to get there involves a new training challenge: increasing her tolerance to lactic acid.

Lactic acid is common among athletes who perform strenuous workouts. The buildup of lactic acid in the muscles causes them to work less efficiently and creates a lot of pain. Thunstrom describes her muscles feeling “locked up” after racing to the point where she can hardly move.

To figure out how to increase her tolerance level to lactic acid, Thunstrom tested at the Crown Human Performance Lab. The tests helped her identify how her muscles responded to exertion. After measuring the lactic acid, the advanced equipment can explain how increased muscle strain correlates to her lactic acid levels.

“I haven’t personally done lactic acid testing, but a lot of my teammates have,” says Thunstrom. “You participate in some strenuous exercise, whether that be on a treadmill, bike, or something else and you gradually increase the work rate every minute or so. At different intervals, blood samples are drawn, and the blood lactate concentration is measured.”

Thunstrom worked with Dr. Stacy Ingraham, Professor and Director of Exercise Science at Crown College. As part of a study lab, the Exercise Physiology students in Dr. Ingraham’s class got the opportunity to help Thunstrom with her testing.

“I had worked with Stacy Ingraham in the past for training with my speedskating team,” says Thunstrom. “I asked her to sit on a heat-stress panel for my company at a safety conference last year.”

Inside the lab, with a classroom full of Exercise Physiology students, Thunstrom battled through a strenuous run and bike ride. The class watched and assisted, while pointing out significant findings inside the results. Dr. Ingraham took note of how the results for Thunstrom would directly affect her training.

“One of the greatest findings from testing was Allie’s maximum amount of oxygen level during an intense workout and her muscle oxygen saturation level,” says Dr. Ingraham. “We were able to isolate her weaknesses specific to the difference in oxygen saturation in her quadriceps and her gastrocnemius. This finding will allow her conditioning to be tailored to fix the differential. With adaptation she will have a better shuttle for lactate and lactic acid, the main contributor to fatigue in her events on the ice.”

Biologically, everyone is created and wired differently. For Thunstrom, pinpointing her weaknesses and working to overcome them will be her strongest path to Beijing in 2022.

“I definitely need to put a stronger emphasis on lactic acid and how I can increase my tolerance levels,” says Thunstrom. “I know that is where I struggle and that it is holding me back. I need to focus on putting together a plan that attacks all of my weaknesses.

With Beijing 2022 right on the horizon, Thunstrom hopes to conquer her weaknesses, and like always, never back down from the challenge.