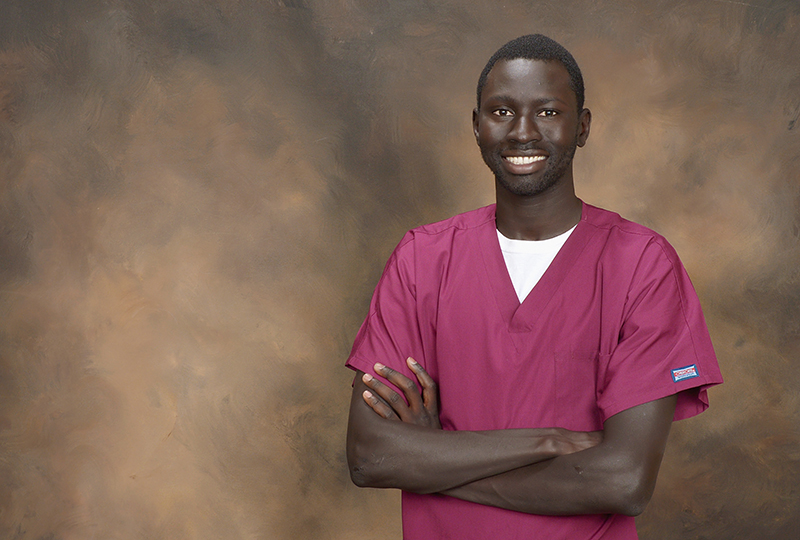 Crown College alumnus, Gatjeak Gew, fled South Sudan during the Sudanese Civil War as a child and now he is studying to be a Medical Doctor (M.D.) at Georgetown University. Though the journey was not easy, Gew explains how faith, hard work, and passion helped him find his way.

Gew was seven years old when Sudanese Civil War struck South Sudan and his family made the decision to flee the country. Gew remembers escaping the country with his mom and three siblings. The family stayed in a refugee camp in a region of Kenya for months with other South Sudanese families who also fled the turmoil. They waited there to receive their immigrant visas.

One night as the family sat quietly in their camp, a local rebel group attacked the refugees. Confused, shocked, and terribly afraid, the family ran for their lives. Gew remembers seeing people die in front of his eyes. Trying to escape the gruesome rebels, the family ran until they safely reached a nearby United Nations aid station about a half mile away.

Gripping tight to his family, Gew was shocked by what he had seen. He could not understand why someone would attack or kill innocent people. He remembers feeling grateful for his family’s safety.

Gew will never forget what happened that night. He credits God for saving his and his family’s lives.

After months of waiting, they finally received their immigrant visas. Gew’s family settled in the Midwest, a common area for many South Sudanese refugees. From age seven to fourteen, Gew lived in Omaha, Nebraska. When he turned 15, his family moved to Minnesota.

The Midwest soon became home for Gew. His family found decent-paying jobs and lived close to many other Sudanese families. Gew and his family were grateful and happy, but that did not mean living in the U.S. was always easy.

Moving to the U.S., Gew remembers experiencing the significant differences in American culture and his native culture, called Nuer.

“There were certainly difficulties growing up,” says Gew. “Reconciling the disparities between American culture and Nuer culture was difficult for me. I was suddenly immersed in a new world and still hadn’t fully understood the place I came from. Nuer culture has a community mindset–no one is ever left to his or her own devices in times of need. If someone needs support emotionally, financially or in any other way, those in the community come together and do what they can.”

Sometimes Gew felt far away from home living in the U.S., but he found comfort in his forever home with Christ.

“I knew my place in God’s Kingdom despite not always feeling I knew where I belonged in this world,” Gew says.

As Gew grew up, he began developing specific interests in school. He loved his life science classes more than any other subject. He became passionate about helping others. He knew that whatever he did with his life, he wanted to utilize the skills and talents he believed God gifted him. He began reflecting on his time in South Sudan and knew he could make a difference.

Eventually, he decided to pursue medicine and missions as he progressed in his schooling.

When Gew applied for college, he had a desire to study missions–particularly medical missions. He wanted to find a school where he could grow and learn, both academically and spiritually.

He stumbled upon Crown College and felt the school would allow him to develop a solid foundation before serving in the medical and missions field. He applied and attended Crown in the fall with a major in Biology.

Gew grew at Crown in ways he did not think possible. He made supportive relationships with students, staff, and faculty. He remembers his faith being challenged and developed in his classes. He thanks his professors for preparing him academically, and allowing him to believe in his own abilities.

After graduating in 2010, Gew obtained a laboratory job at HonorHealth Medical Center in Phoenix, Arizona. While he aspired to apply for medical school, his family faced financial issues. After four years of working, Gew decided to begin his application process for Georgetown University.

Gew explained how Dr. Don Hardy, Professor of Biology at Crown, assisted him through the year-long process of applying for Georgetown. Dr. Hardy wrote Gew letters of recommendation and continually encouraged him.

After applying for medical school, Gew faced waves of doubt. It had been years since he graduated from Crown. He began to doubt his own abilities and felt frustrated and impatient when everything did not go according to his plan.

“I often felt I needed to know exactly where my life was headed and how I would get there,” says Gew. “It was difficult at times to stay patient and know that God will work things out exactly how they should be.”

Finally, in 2017, Gew received his acceptance into Georgetown University to continue his pursuit as a Medical Doctor (M.D.).

However, Gew has not forgotten his passion for missions. After graduating, he hopes to revisit his home country to work as a medical missionary.

“South Sudan is a young country and severely lacks certain basic necessities–quality healthcare is one of them,” says Gew. “I am still years out from being an independently practicing physician, but it is in this area I would like to utilize my education and training to do God’s work in my home country.”

Whenever Gew thinks of his childhood–in South Sudan, the night his camp was attacked, immigrating to the U.S., attending Crown College, getting accepted into Georgetown–he is convinced everything happened according to God’s plan and timing.

“Where I am today is a testament of God’s grace and the incredible richness of His blessings,” he says.

Though the journey was not easy, he is grateful he has a God that was with him every step of the way.