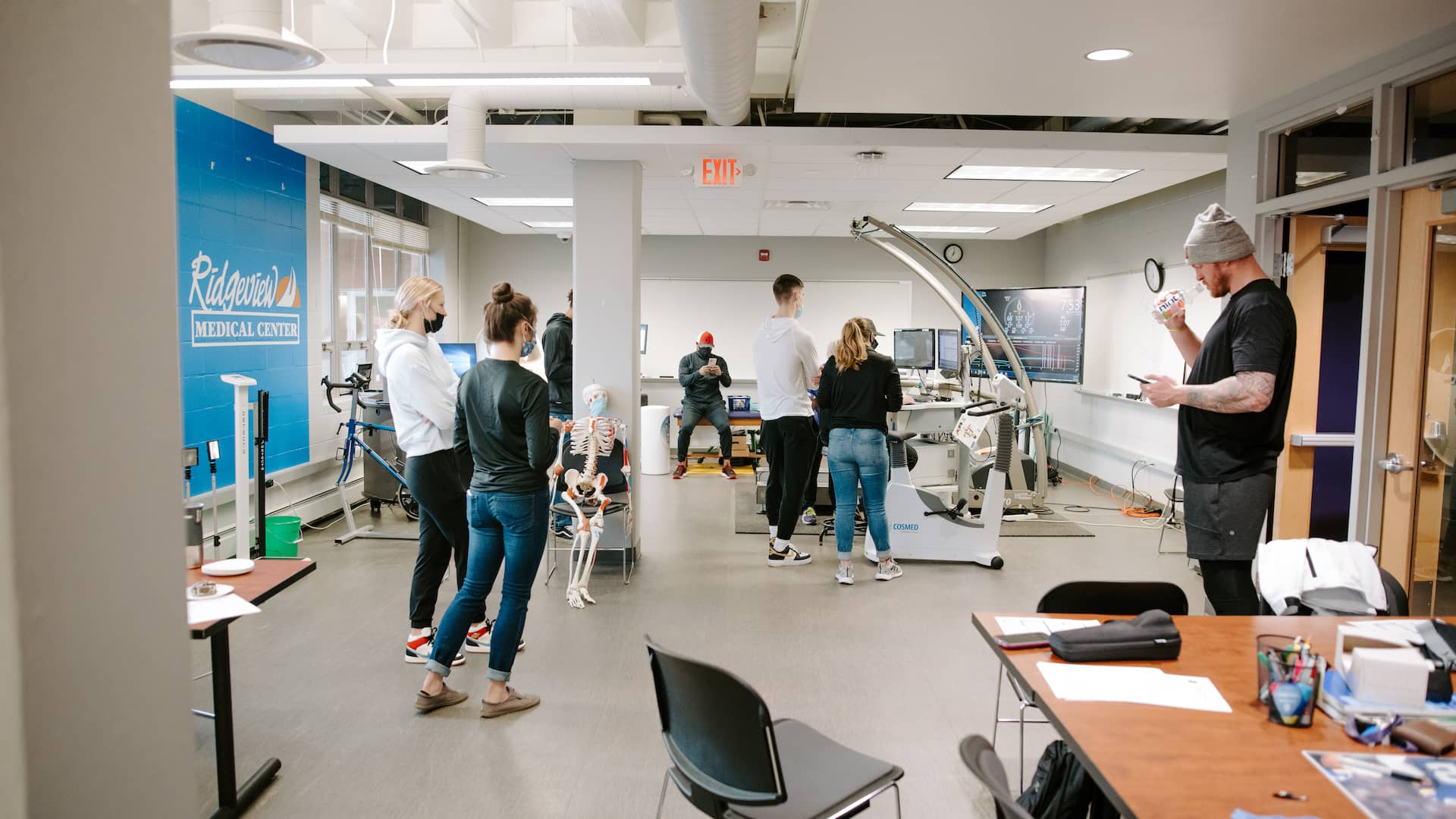 “I’ll be back,” Kyle Rudolph responded on Tuesday morning after testing in the Crown Human Performance Lab (HPL).

In his days as a Viking tight end, Rudolph made two Pro Bowl rosters, helped the team reach the NFC Championship Game in 2017, and caught 48 career touchdowns, including a memorable game-winning touchdown pass in New Orleans to advance the Vikings past the wildcard round in 2020. He was a longtime team captain, beloved by many Minnesotans.

Rudolph was released from the Vikings earlier last week after being the longest-tenured player, totaling ten seasons. In an endearing letter titled “Dear Minnesota,” he wrote, “My career is my career, and I’m really excited about whatever is around the corner… But it’s just football. Minnesota, on the other hand… It’s so much bigger than that. It’s where our future is. It’s where our heart is. It’s home.”

Rudolph still dreams of winning the Superbowl and is training to be in the condition to bring his next team to this ultimate stage. That’s where Crown’s Human Performance Lab came in.

It’s a win-win for everyone involved; athletes get state-of-the-art performance results, and students get real-life experience not available anywhere else, and even some income.

Kyle Rudolph tests his VO2 Max on a metabolic treadmill. 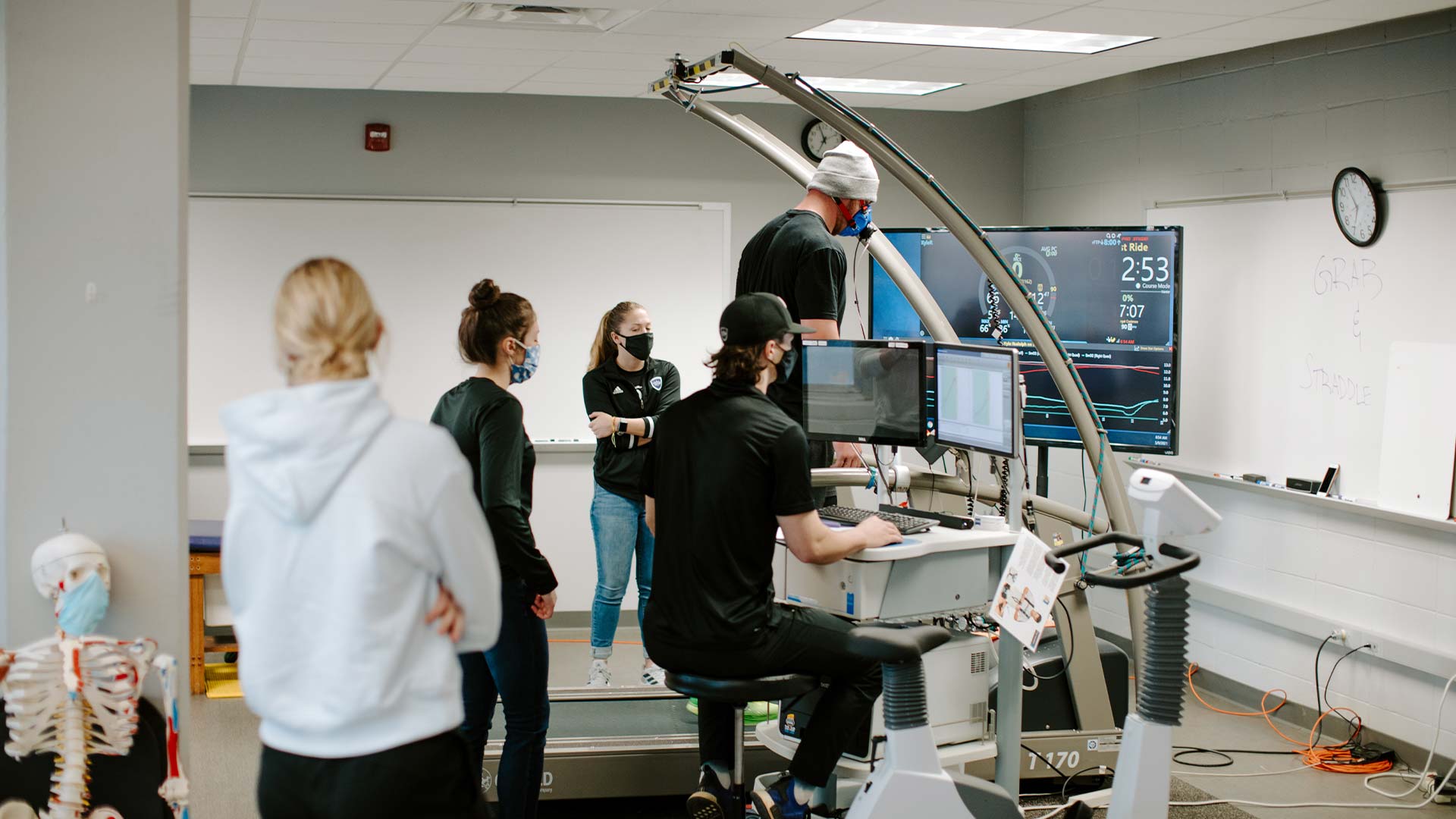 Rudolph got the full HPL treatment. Students measured his fat mass and lean muscle mass in the Bod Pod, a high-tech body composition measuring device. They determined Rudolph’s VO2 max by having him course steep inclines on the metabolic treadmill. And students pushed Rudolph on the Wingate bike to test his power.

Rudolph signed a photo of him in his former Vikings jersey and remarked, “Thanks for testing and pushing me!”

These highly useful health and performance metrics will be valuable as Rudolph faces the free market.

Rudolph’s friendly demeanor set the tone for the fruitful morning as students cheered him on through the various tests. Exercise science student, Seth Betts, took the lead, generating charts and performance metrics to hand off to Rudolph’s trainer, Ted Johnson, Founder and Director of Sport Science at Performance Athletix in Eden Prairie.

Betts is a senior in the exercise science program and also a talented baseball player, named First Team All-Conference by the UMAC in 2019. He combines his studies in sport performance with his play on the field. As captain of the team, Betts helped lead the baseball team to their first-ever UMAC Playoff appearance in the last full season. 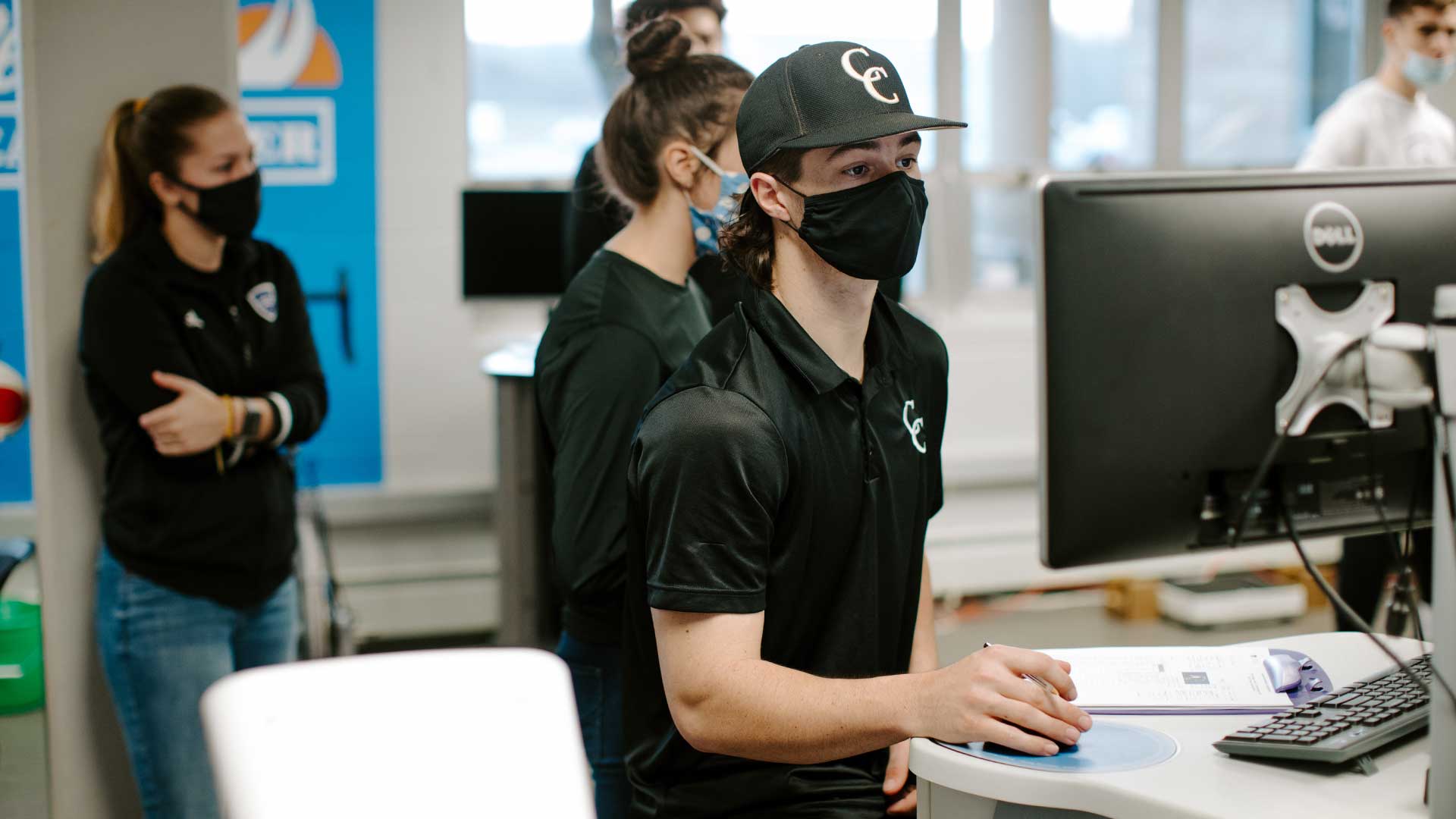 Things continue to look up for the exercise science program at Crown College. Just last year, Crown founded the M.S. in Exercise Science/Sports Performance, adding an option for a 3+2 program that allows students to receive both an undergraduate and graduate degree in 5 years. With a projected 11% job growth from 2019-2029 in this field, Crown seeks to continue to expand this program.

Another student-athlete that assisted in testing the free agent tight end was Christian Moore, a San Diego native that recently concluded his fourth season on the Men’s Basketball team. Moore, who will graduate in Exercise Science with Betts this May, has also put his knowledge to work on the court, getting better every season and putting him in the position for a potential All-Conference selection to be announced soon.

Rudolph was not the first premier athlete to step foot into Crown’s Human Performance Lab. Olympic hopeful and Minnesota Whitecaps forward Allie Thunstrom was tested in 2018. The pandemic slowed the trajectory of the lab’s ability to be an external resource, but we are sure to see more and more reach new heights in our lab in the years to come.

Crown College thanks Kyle Rudolph and Performance Athletix for allowing us the opportunity to share their story, and we look forward to seeing Rudolph on the field soon.